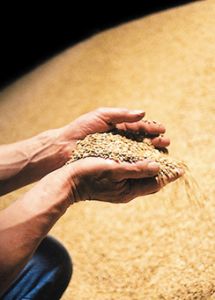 Germany is an agricultural country: more than 80% of the country's territory is put to agricultural or forestry use. It is also a major exporter in the agricultural and food industries with corresponding exports valued at more than 50 billion euros. The most important commodities include meat and meat products.

When it comes to the production of meat, all those involved work together closely – agriculture, research institutes, training and consulting institutes and those responsible for meat marketing. They ensure that scientific findings and the requirements made by the sales markets are efficiently implemented in breeding, fattening and husbandry. Accordingly, excellent and constantly updated know-how is made available to Germany's farmers.

The production of pork has a long tradition in Germany. Production methods and structures today are on a high standard and undergo constant further development in terms of animal genetics, animal health, production technology and hygiene.

A production quantity of more than 5.1 million tonnes in 2020 puts Germany top of the list of pork producers in the EU. On a global scale, Germany comes third after China and the USA. Pork husbandry in Germany is primarily concentrated in the North West of the country which accounts for about half of the entire domestic pig population.

Pig breeding in Germany is characterised by the large number of different breeds. Together with the high-performance animals obtained by crossing the German Landrace with the Pietrains, there are also numerous traditional breeds of pigs, such as the Schwäbisch Hall Domestic Pig, the Bentheim Black Pied and the Angeln Saddleback. All breeds stand out with their robust health and excellent quality of meat. While the number of businesses involved in pig farming declines, specialisation continues to increase. Today a good 20,000 pig farms have a total of 26 million pigs. 60% of all pigs are raised in farms with more than 1,000 animals. Constant increases in productivity have brought pork production to record levels. In 2020, approx. 53 million pigs were slaughtered, compared to the year 2000 when the number was 10 million less.

In 2020 Germany had 133,000 cattle farms with just about 11 million animals, making Germany the second largest producer in Europe, with more than 40 breeds. The diversity in cattle breeds reflects the regional climatic and feeding differences to be found from the Bavarian Alps in the South to the North Sea and Baltic coasts. Cattle farming in Germany is differentiated according to beef and dairy cattle, as well as dual-purpose breeds. Red-spotted highland cattle and Brown Mountain cattle dominate in South Germany, while more German Holstein cows (Black Pied Lowland cattle and the Red-And-White Holstein cattle) can be found in the North.

As with agriculture in general, cattle stocks in Germany are tending to develop in favour of the larger farming businesses. Today more than 60% of the cattle are kept in herds of more than 100 animals.

Cattle and beef production in Germany is a professional business. The country has very high standards covering the whole supply chain, from breeding and insemination on the farm premises via husbandry, slaughtering and processing through to performance and quality control. 64,500 agricultural businesses with altogether 3.5 million head of cattle are subject to performance testing for milk and beef yield. The corresponding tests check parameters such as daily weight increase, slaughtering weight, cutting up and the meat share. Breeding processes then take direct account of the corresponding results.